by Erin December 21, 2016
Tom officially has a new addition to his crab repertoire.

This was the second time Tom made tenshinhan (crabmeat egg foo
young with steamed rice). Mastering a couple of Asian dishes that
involve multiple tasks as well as preparing a few dishes simultaneously
on a number of occasions have given him the confidence to try more
recipes. 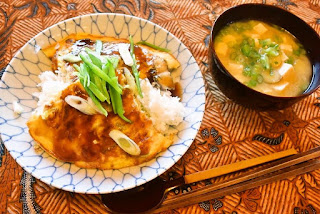 When Tom made tenshinhan the first time, it naturally took longer and some processes were confusing. The second time, his focus was to finish up crabmeat in the fridge, and he basically forgot about preliminary prep such as rehydrating dried shiitake mushrooms or using dried julienned daikon radish (substitute for takenoko bamboo shoots). But once these problems were solved (by me), his cooking seemed to go well —  at least I did not hear him screaming in the kitchen.

Tom also made miso soup with tofu and potatoes for this lunch. I am not sure about the potato addition, but Tom was very proud of how thinly potatoes were sliced. Another green vegetable, such as seri water dropwort, might have been a better choice, as it would add one more leafy green and broaden the taste range. But still, trying something is always good. Understanding through these trials how certain ingredients produce particular tastes and sodium levels is also good. Not about potato slices, but I was impressed how green onions were sliced thinner than before. While it may sound so minor, this is actually a major improvement. Green onions tasted succulent and tender, and worked very well to add a refreshing note to the soup. His bulky cut green onions in the past added rather awkward toughness and way too much “refreshment.”

All my comments (complaints, according to Tom) on the form and size of individual ingredients along with my explanations over the past several years on how they contribute to the final texture of dishes are finally paying off! Yes!! 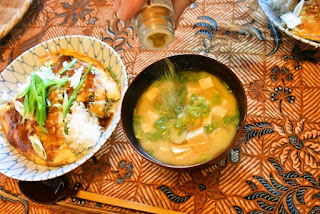 After he arranged the table, he picked up a little jar of sansho pepper powder.
The next moment, before I could say anything, he sprinkled it over his miso soup and mine.
I like to sprinkle shichimi pepper, which does contain sansho pepper as one of seven ingredients, but sansho alone wouldn’t work well for this kind of miso soup ….
Tom was so happy with the dishes he made and paid no attention to the jar’s label (and cap color).

Something new every time.