by Erin December 7, 2021
Udon noodles made without adding salt! Using boiling water for dough appears to be a common technique with commercially available salt-free udon. But they don’t share other secrets to achieve a chewy yet sticky texture. Some people suggest using milk or tofu as a (partial) replacement for water, while others say water alone gives satisfactory results. Below is my best attempt so far, based on a bread-making technique using yudane water roux (flour gelatinization). 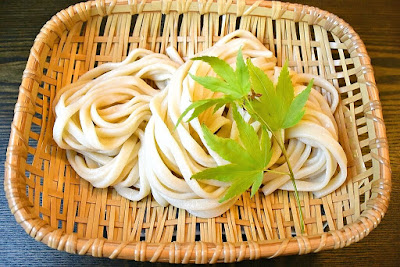 Extra flour and potato starch (or corn starch, tapioca starch) for rolling out dough (not in photo)

When mixture temperature is manageable, switch to hand, and knead until smooth.

Cover, and let sit in fridge overnight (or several hours at room temperature).

Remove water roux from fridge and bring to room temperature.

Bring milk to room temperature (or microwave for 10+ seconds if cold).

The mixture is still crumbly at this point.

Cover, and let sit for 5+ minutes to help moisture blend with flour.
(This process is effective as a jump start of the next process, but can be skipped.)

Without closing bag, place on towel on floor, and step repeatedly on bag to flatten/knead dough.

Peel off bag (dough is sticky the first 2-3 times), fold into three, and turn dough 90 degrees.

Fold dough into three one last time, close bag, and let sit at room temperature for 60-90 minutes (or in fridge for 4+ hours)

Sprinkle flour and potato starch, and roll out dough into rectangle.

Cut into desired width (noodles will be 20% or so wider when boiled).
When dough is soft, cut strands tend to stick to each other during cutting. If this happens, unfold strands and sprinkle potato starch, shake off excess, and set aside.
With remaining dough, sprinkling more potato starch on top surface can help somewhat.

Udon is ready to boil.
(Udon can be frozen at this point.)

Bring plenty of water to boil.
Once boiling, put udon, and cook for 7-8 minutes (or until desired softness is achieved), first at high heat to return to boil after adding noodles, then reduce heat to medium low.
Stir occasionally to prevent noodles from sticking to the bottom.

Transfer to a bowl with lots of water, and chill.
Rub udon surface with both hands, and rinse several times until water is clear.