by Erin May 15, 2018
One of the standard ramen noodle variations in Japan comes with soy sauce flavored broth. Here is a tasty example topped with asparagus and eringi saute for spring and early summer. A combination of homemade chicken stock with a soft ginger aroma and niboshi-kobu-shiitake dashi (dried young sardine, kelp & dried shiitake stock) provides a flavorful underlying tone. 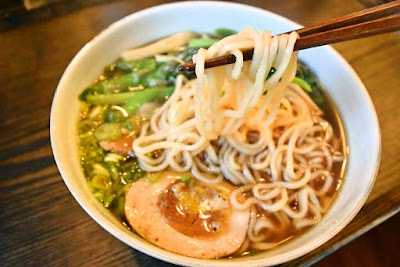 Proportion of seasonings was figured out backwards, starting from total sodium figures and the salt level needed to ensure tasty results, and it did work like magic after several trials and adjustment. Once you get the right proportion of seasonings, this is pretty simple to make and satisfies your taste buds.

Put chicken stock and niboshi-kobu-shiitake dashi in a pot, and add all seasonings.
Soup is ready once heated.

3.
Start boiling plenty (approx. 4,000 cc*) of water for cooking noodles. (*Enough to warm serving bowls as well as to ensure that most sodium in dried noodles is released into boiling water). Once water boils, take some hot water to heat serving bowls.

When water boils vigorously, add noodles, and cook as directed on package until desired softness.

In the meantime, heat sesame oil and saute asparagus and eringi on medium heat for a few minutes, until asparagus is tender.

Once noodles are done, drain well, and put into individual bowls.