by Erin September 1, 2019
My first real meal after saying goodbye to a wisdom tooth three days ago.
Still nothing crunchy or tough to chew, but it had enough variation compared to my recent diet of somen noodles or rice and bean curry soup (all easy to eat with half a mouth). 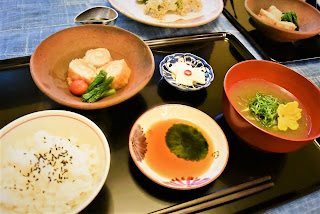 Shrimp-stuffed shishito tempura (cut off in the photo!) uses relatively straight, larger shishito from our greenhouse. As they reach a good size, I picked and stored them in the fridge for this tempura. While larger or longer peppers such as manganji togarashi are common choices for stuffing, shishito works just fine, and this tasted great, as expected. Nira garlic chive flowers were something I always wanted to try. They send out a soft garlic taste in your mouth. The aroma is gentle but still a bit too strong to pair with other Japanese dishes. It would better suit cuisines that commonly use garlic or as a snack for drinks. For daikon oroshi grated radish served with tentsuyu tempura dipping sauce, we used Korean Chong Gak radish from Tom’s vegetable bed. It has a similar texture to kabu turnip and looks a bit creamy when grated.

Achara-zuke [lit. achara pickle] is basically vegetables marinated in sweetened vinegar with taka no tsume red pepper. Achara-zuke is part of so-called nanban ryori, or food brought by Portuguese to Japan starting in the 16th century that features red peppers and/or green onions. The “achara” in achara-zuke comes from “achar,” or pickles and condiments found across Southeast Asia (also in the Middle East and some parts of Africa?). As a side note, achaaru (アチャール) in Japanese usually refers to Indian achar. An interesting example of transmission of culture — in this case, food and food names.
Nagaimo tasted particularly good in this simple pickle.

Kabu and usuage thin deep-fried tofu are my favorite combination. Shinoda-maki is a general food term that refers to ingredients (vegetables, meat, fish, tofu) rolled with usuage, and it is usually simmered in broth. For this dish, I microwaved sliced kabu until soft and arranged the slices on cut-open usuage, rolling everything like jelly rolls and simmering in broth. Kabu takes on a creamy texture, perhaps from the oil in usuage. Although usuage is first prep-boiled and patted with a paper towel to absorb excess oil — the procedure is supposed to remove 30% of fat content — there is enough oil to make other ingredients taste richer.

Wisdom teeth are usually called oyashirazu [lit. parents don’t know] in Japanese. Since wisdom teeth usually develop in late teens or 20s, parents do not know of their emergence or development (due to the short lifespan in the distant past when the expression started to appear). “Oyashirazu” is said to be included in a 1595 Latin-Portuguese-Japanese dictionary published by a Jesuit priest and monk in Nagasaki. Well, times have changed. My parents are both alive, but I never told them about my wisdom tooth — parents still don’t know.