by Erin December 7, 2021
A popular topping for ramen noodles! These eggs are also tasty on their own, in addition to working well as a topping for other types of noodles or steamed rice and as part of a salad (one of key components or as dressing). The recipe below involves slow flavoring in the fridge, where eggs are ready starting on Day 2 and lasting at least to Day 6. 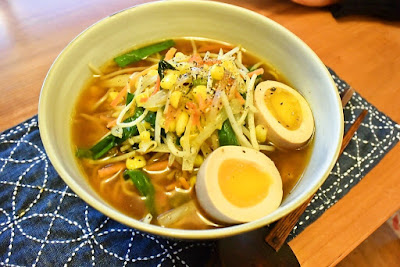 Gently place eggs (bamboo basket is used in photo; if not using a strainer, put individual eggs with a spoon or ladle into boiling water).
Boil for 6-7 minutes (closer to 6 minutes if eggs have been kept near room temperature; closer to 7 minutes if eggs have just come from the fridge).
Turn eggs often for the first 2-3 minutes to center yolk.

Meanwhile, mix all ingredients for marinade, microwave for 30 seconds (or bring to boil in small pot), and let cool.

When cool, shell, and place in plastic bag.

Pour marinade, remove air inside bag as much as possible, close bag, and refrigerate.
(Ready from the next day.)