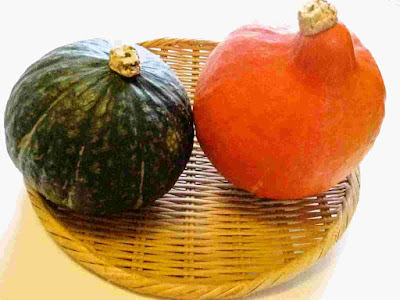 Most kabocha grown and distributed today in Japan are improved varieties of kuri kabocha [lit. chestnut pumpkin] or seiyo kabocha [lit. Western pumpkin, Cucurbita maxima Duchesne], which were introduced to Japan in the late 19th century. The less commonly distributed nihon kabocha [lit. Japanese pumpkin, Cucurbita moschata Duchesne] arrived in Japan on a Portuguese ship via Cambodia and has deep grooves on its skin, as seen with the representative kiku kabocha [lit. chrysanthemum pumpkin] variety. Cambodia is said to be where the vegetable’s Japanese name “kabocha” comes from. As a side note, kiku/nihon kabocha‘s true origin is Mexico, whereas kuri kabocha‘s roots are in Peru — just two more examples of vegetables crisscrossing the globe.

Among all sorts of varieties, the one with glossy dark green skin (kurokawa kuri kabocha, lit. black skin chestnut pumpkin) is typically associated when people hear “kabocha” in Japan. Both dark and orange skin kabocha are very starchy and sweet. In the US, however, quite a few dark skin kabocha sold at neighborhood markets or chain grocery stores are not quite as starchy or sweet as widely available varieties in Japan or some other countries, and I sometimes find butternut squash is a better choice. If you find kabocha from your local store rather watery and bland, try an Asian grocery store. In particular, the orange variety, increasingly common in the US recently, seems to have consistent sweetness. Thinner skin is another advantage of the orange variety.

One of the popular orange varieties often I see here appears to be Utsugi akagawa amaguri kabocha [lit. Utsugi’s red skin sweet chestnut pumpkin], a traditional Kaga vegetable from Utsugi area of Kanazawa City in Ishikawa Prefecture (Kaga is the prefecture’s old name) or a strain of this type. If so, it is usually incorrectly labeled as Uchiki, probably because of the region-specific reading of the Chinese characters (打木) for the town name.

Kabocha with yellowish orange flesh is often cited as a representative vegetable rich in carotene, Vitamin B and Vitamin C. It is also rich in Vitamin E as well as potassium and fiber. Kuri/seiyo kabocha is nutritionally superior, especially in terms of β-carotene (4000 μg/100 g edible part, which is as high as spinach, vs. 730 μg for kiku/nihon kabocha) and Vitamin C (32 mg/100 g vs. 16 mg for kiku/nihon kabocha). Carotene (both β and α) and Vitamins C and E prevent cell damage from active oxygen and carcinogenic substances. Some carotene changes into Vitamin A in the body, which strengthens skin and mucus and protects respiratory organs, in turn improving resistance against infectious diseases in combination with Vitamin C — hence some scientific grounds for the seasonal custom of eating kabocha on winter solstice to prevent colds. Vitamin E improves blood circulation and helps ease sensitivity to cold. Potassium lets the body get rid of excess sodium, thus helping to control high blood pressure.

Try kabocha in the following recipes