by Erin December 7, 2021
Kikuzuki, or chrysanthemum month, is another name for September in the old calendar in Japan — today’s October. So here is an ordinary ohitashi featuring the iconic flower of  the season. 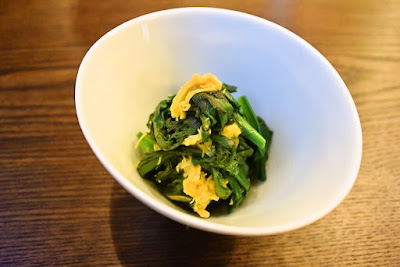 Mix all ingredients for ohitashi marinade, and set aside.

Bring plenty of water to boil to blanch leafy greens and to rehydrate dried chrysanthemum flowers.
Place flowers in a prep bowl, and pour some boiling water to rehydrate.

After 1 minute, transfer rehydrated petals to cold water to cool.

Squeeze out excess water, and keep in the fridge.

Blanch green vegetables.
Here, shungiku leaves are cut or torn into 3-4 cm, put in a basket, and quickly blanched until color brightens.

Shungiku leaves are then immediately transferred to cold water to stop cooking.

When cool enough, transfer to strainer.

When cool enough, squeeze out excess water, cut into 3-4 cm,

Likewise, squeeze out excess water from shungiku, and put in ohitashi marinade.

Put in the fridge.

About 30 minutes to 1 hour prior to serving, bring ohitashi out of the fridge.
Add chrysanthemum flowers, and gently mix.