by Erin December 7, 2021
Colorful coon shrimp (small spot shrimp), a local specialty, paired with fuki Japanese butterbur from our garden. Cooked coon shrimp we bought the other day happened to be inexcusably salty. After wondering if we should just throw them away, I decided to do an experiment, marinating them in lightly seasoned dashi to get rid of excess sodium while flavoring at the same time, a technique that works like magic with smoked salmon. And yes, the rescue effort was a delicious success. 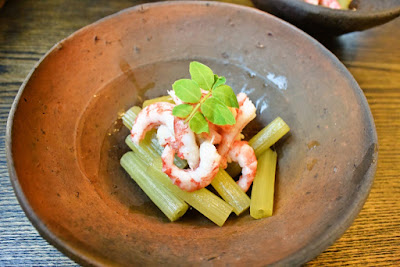 2 kinome sansho leaves (for garnish; not in photo)

In a small pot or stovetop-safe container, put all marinade ingredients for fuki, and bring to boil.

Once marinade is cool enough (cooler than room temperature), put fuki back in marinade, and chill in fridge for a few hours.

In a small pot or stovetop-safe container, put all marinade ingredients for shrimp, and bring to boil.
Once boiling, remove from heat.

Add shrimp, and chill in fridge until ready to eat.

5-10 minutes before serving, bring out fuki and shrimp to warm them up slightly.
Serve fuki and shrimp in individual bowls (leave all marinade behind), and top with sansho leaves.