by Erin December 7, 2021
Fresh English peas go into this ohitashi. The peas are very softly flavored here, so they work great as a garnish or as an additional ingredient in a number of dishes. When serving as is, add ginger (julienned, grated or juice) for a refreshing note or use a tiny amount of soy sauce. 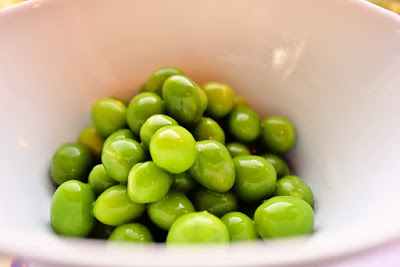 Add sake, mirin and usukuchi soy sauce to dashi, and mix.
If dashi is hot, cool.

(If ohitashi marinade is hotter than room temperature, chill the container in ice water for immediate cooling before refrigerating.)

(Immediately after soaking, pea surface is wrinkled as in above photo, but it becomes smooth as in photo at left after 1 hour or so.)